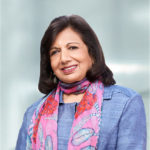 Kiran Mazumdar-Shaw is a first-generation entrepreneur and global business leader with over 4 decades of experience in biotechnology. Fueled by her passion, she started her biotech journey in 1978 from her garage in India. Today, that journey is changing lives for the better across the globe. She is regarded as an unconventional thinker with many firsts to her credit. Under her aegis, Biocon delivers on the promise of making medicines accessible and affordable to millions of patients worldwide.

Chairperson of the Board of Directors since inception.

Kiran Mazumdar-Shaw is a pioneering biotech entrepreneur, a healthcare visionary, a global influencer, and a passionate philanthropist. As a leading woman in science, she is a role model to millions. She is steadfast in her pursuit of innovative technologies that enable affordable access to healthcare, and is committed to making a difference to billions of lives globally.

She has scripted a hugely successful entrepreneurial story by building Biocon, an innovation-led global biopharmaceuticals enterprise, which has made outstanding contributions to life sciences & research, and generated global respect for India.

Kiran has received several coveted awards, honours and titles, both national and international, in recognition of her inspiring achievements.

Compassionate Capitalist:
• Second business leader from India to sign the Giving Pledge, an initiative of the Gates Foundation, committing to give the majority of her wealth to philanthropic causes.

In addition to her formal qualifications as a brew master, Kiran holds honorary degrees from several renowned international universities.

Kiran Mazumdar-Shaw is a pioneer of the biotechnology industry in India and the founder of the country’s leading biotechnology enterprise, Biocon. Named among TIME magazine’s 100 most influential people in the world, Kiran is recognised as a thought leader who has made her country proud by building a globally recognised biopharmaceutical enterprise. Biocon is committed to innovation and delivering best-in-class, affordable therapeutics to patients across the globe.

As a global influencer, she is ranked among ‘the World’s 25 Most Influential People in Biopharma’ by Fierce Biotech, Forbes magazine’s ‘World’s 100 Most Powerful Women’ and Fortune’s ‘Top 25 Most Powerful Women in Asia-Pacific.’ She has been recognised as the only Indian on Forbes’ list of ‘World’s Self-Made Women Billionaires.’ She has been featured in ‘The Worldview 100 List’ of the most influential visionaries by Scientific American magazine and named among the ‘100 Leading Global Thinkers’ by Foreign Policy magazine. Kiran has also been ranked No. 1 in the Business Captains category on ‘Medicine Maker Power List’ 2018, an index of the 100 most influential people across the globe in the field of medicine, where she has been among the Top 10, consecutively since 2015.

Kiran has recently been awarded with the EY Entrepreneur of the Year India 2019 Award and named EY World Entrepreneur of the Year 2020. She was honoured with the ‘Lifetime Achievement Award for Outstanding Achievement in Healthcare’ by the Indian Council of Medical Research (ICMR), New Delhi. She has also been honoured with the Lifetime Achievement Award at the FICCI-Healthcare Excellence Awards 2019, in recognition of her valuable contribution and exemplary work in the field of Healthcare. She has been conferred the US-India Business Council Global Leadership Award at the USIBC India Ideas Summit 2018, in recognition of her contributions and leadership across roles and sectors. She was felicitated with ‘Advancing Women in Science and Medicine (AWSM) Award for Excellence’ 2017 by The Feinstein Institute for Medical Research, USA. Kiran has been named ‘India’s Most Respected Entrepreneur’ for 2017 by the prestigious Hurun Report and felicitated as an exceptional woman achiever by the Ministry of Women and Child Development, Govt. of India, for being the first Indian business woman to reach USD 1 billion net-worth.

In January 2020, Kiran was honoured with the Order of Australia, Australia’s Highest Civilian Honour, for her significant service to advancing Australia’s bilateral relationship with India, particularly in promoting commercial and educational links. In 2016, she was conferred with the highest French distinction – Chevalier de l’Ordre National de la Légion d’Honneur (Knight of the Legion of Honour). In addition, she was also bestowed with ‘The Global Leadership in Engineering Award’ by Los Angeles-based USC Viterbi, School of Engineering in 2016 for excellence in biotechnology worldwide. The U.S.-based Chemical Heritage Foundation has conferred her with the ‘2014 Othmer Gold Medal’ and the Germany-based Kiel Institute for the World Economy has awarded her its coveted ‘2014 Global Economy Prize’ for Business. She has received two of India’s highest civilian honours, the Padma Shri (1989) and the Padma Bhushan (2005).

Kiran holds key positions in various industry, educational, government and professional bodies. She has been appointed as a member of the high-level expert committee constituted by the Department of Biotechnology (DBT), to review the autonomous organisations under the administrative control of the department. She is also a Governing Council Member of the National Institute of Immunology, an autonomous research institute of the DBT. She has been appointed as Member of the Steering Committee of the National Biopharma Mission, an industry-academia collaborative mission of the DBT. She is Non-Executive Chairperson of the Association of Biotechnology Led Enterprises (ABLE), a not-for-profit pan-India forum representing the Indian biotechnology sector. She is a founder member of Karnataka’s Vision Group on Biotechnology, which she currently chairs. She has also been appointed Chairperson of the Karnataka government’s Vision Group to encourage pharma and medical devices units in the state.

She is on the board of directors of the US-India Business Council (USIBC) and the Advisory Council of the UK-India Business Council. She has been appointed as Global Alumni Ambassador for Australia by the Department of Foreign Affairs and Trade, Australia and she has been appointed as the Victorian Business Ambassador by The State Govt. of Victoria, Australia. She served as a member of the Governing Body of the Indian Pharmacopoeia Commission and also served as a member of the Board of Trustees of the US Pharmacopeia Convention. She is the Honorary Consul of Ireland in Bangalore.

Kiran has been elected as a full-term member of the Board of Trustees of The MIT Corporation, USA, and is additionally on the advisory board of the recently established Abdul Latif Jameel Clinic for Machine Learning in Health at MIT (J- Clinic), U.S., which seeks to transform healthcare with artificial intelligence and machine learning. She serves on the board of advisors for The National Society of High School Scholars, U.S., and is on the board of trustees of the Keck Graduate Institute in the U.S. She has been elected as a member of the prestigious U.S. based National Academy of Engineering (NAE), for her contribution to the development of affordable bio-pharmaceuticals and the biotechnology industry in India, and she is the first female Foreign Fellow to be elected as a member of the Australian Academy of Technology and Engineering (ATSE).

Moreover, Kiran is involved in several charitable organisations. She serves on the Global Advisory Committee for the Women and the Green Economy Campaign (WAGE)™ initiative and is a member of the MIT Charter Society, USA, in honour of her philanthropic commitment to the Institute. She is also associated with The Live Love Laugh Foundation, a leading not- for-profit organisation spreading mental health awareness, as a member of its Board of Trustees.

Kiran’s commitment to affordable healthcare extends beyond business. Her philanthropic initiatives are directed at making a difference to the lives of the marginalised communities. Through Biocon Foundation’s primary healthcare centers, telemedicine initiatives, health awareness programs, public health & sanitation initiatives and preventive screenings for oral & cervical cancer, she is making an enduring impact on society.

She has also established the 1,400-bed Mazumdar-Shaw Medical Center in Bangalore to deliver affordable world-class cancer care services to patients irrespective of socio-economic status. She has also set up the Mazumdar Shaw Center for Translational Research, a non-profit research institute dedicated to developing scientific breakthroughs for treating a wide range of human diseases. Her philanthropic efforts have led her to be featured in the Forbes’ List of ‘Heroes of Philanthropy’. Kiran is also the second Indian to join the Giving Pledge global initiative created by Warren Buffett and Bill & Melinda Gates that encourages billionaires to give the majority of their wealth to philanthropic causes.

Kiran is married to John Shaw, a Scotsman and Indophile, who headed a leading textiles MNC Madura Coats from 1991-1998 as Chairman and Managing Director. John is currently the Vice-Chairman and Non- Executive Director of Biocon.

EY World Entrepreneur of the Year 2020

Named the EY Entrepreneur of the Year, India 2019

Honoured with the Order of Australia, Australia’s Highest Civilian Honour, for her significant service to advancing Australia's bilateral relationship with India, particularly in promoting commercial and educational links.

Elected as a Member of National Academy of Engineering, (NAE), U.S.A., for her contribution to the development of affordable bio-pharmaceuticals and the biotechnology industry in India.

Recognised with the most coveted Lifetime Achievement Award for Outstanding Achievement in Healthcare by the Indian Council of Medical Research (ICMR), New Delhi.

Conferred with Business Woman of the Year at the Economic Times Prime Women Business Leadership Awards.

Conferred With Honorary Doctorate from Deakin University, Australia for her pioneering entrepreneurial role in the field of biotechnology and for her sustained significant contribution to Industry-Academia collaboration between Australia & India.

Ranked Number 2 in Fortune’s Most Powerful Women in Business. Featured on the list since the inception of MPW in 2011.

Ranked Number 5 on the list of Most followed Business Leaders on Social.

Ranked No. 1 in Business Captains Category by the Medicine Maker Power List; Consecutively among Top 10 since 2015.

Felicitated with the honorary Doctorate of Philosophy (D.Phil.) from Amity University Haryana, Gurgaon.

Felicitated as an exceptional woman achiever by Ministry of Women and Child Development for being the first Indian business woman to reach USD 1 billion net-worth.

Felicitated with AWSM Award for Excellence 2017 by The Feinstein Institute for Medical Research, USA.

Honored with the prestigious Women Leader of the Decade Award under the India Pharma Awards.

Conferred with The Global Leadership in Engineering Award by USC Viterbi, School of Engineering based in Los Angeles, USA for Excellence in Biotechnology worldwide.

Featured in ‘The Worldview 100’ list of prestigious U.S based Scientific American magazine.

Global Economy Prize for Business by the Kiel Institute for the World Economy, Kiel.

Featured in ‘World's 25 Most Influential People in Biopharma by Fierce Biotech.

Featured on Forbes’ list of Asia-Pacific's 48 ‘Heroes of Philanthropy’.

Honorary Doctorate of Science by the Trinity College, Dublin.

Honorary Doctorate of Science by the National University of Ireland (NUI).

Featured on Fierce Biotech’s list of ‘25 Most Influential People in Biopharma’.

Featured on Financial Times’ list of ‘Top 50 Women in Business’.

Featured on TIME magazine’s list of ‘100 Most Influential People in the World’.

Featured on Financial Times’ list of ‘Top 50 Women in Business’.

Featured in Forbes' list of Asia-Pacific's 48 ‘Heroes of Philanthropy’.

Honorary Degree of Doctor of Science from the Heriot-Watt University, Edinburgh.

Honorary Degree of Doctor of Science from the University of Glasgow.

Honorary Doctor of Technology from the University of Abertay, Dundee.

Business Woman of The Year Award by The Economic Times.

Karnataka Rajyotsava Award for pioneering biotechnology in India, the Government of Karnataka.

Padma Shri for pioneering biotechnology in India from the former President of India, R Venkatraman.