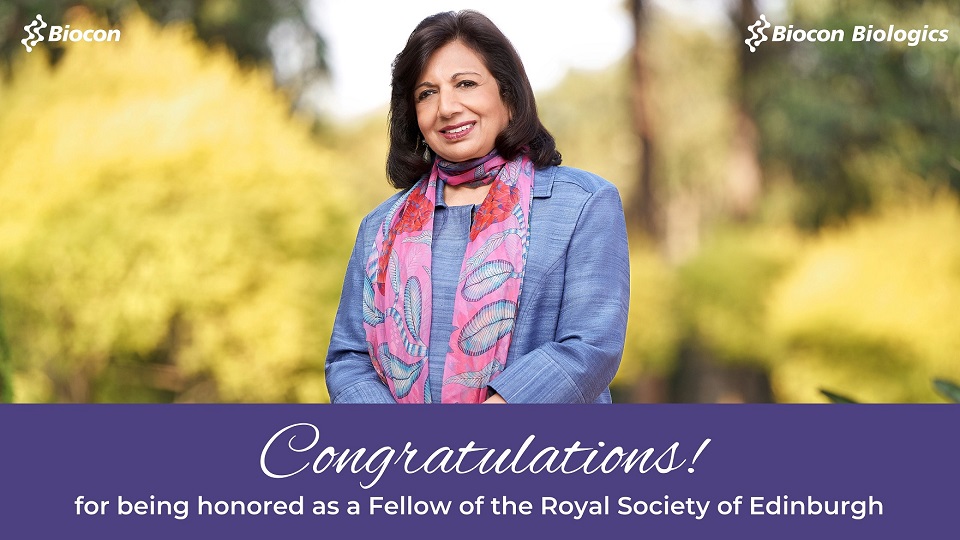 Kiran Mazumdar-Shaw, Executive Chairperson of Biocon and Biocon Biologics, has been elected as the Fellow of the Royal Society of Edinburgh (RSE), Scotland’s National Academy established in 1783, for the advancement of learning and useful knowledge.

Kiran will be joining RSE’s current Fellowship of around 1,700 Fellows who are recognized as being some of the greatest thinkers, researchers and practitioners working in or with Scotland today.

As Scotland’s National Academy, RSE uses the combined knowledge of its Fellows to provide independent expert advice to policymakers and inspire the next generation of innovative thinkers. This knowledge contributes to the social and economic wellbeing of Scotland, its people and the nation’s wider contribution to the global community.

On receiving the Fellowship, Ms Kiran Mazumdar-Shaw said: “I’m truly humbled and honoured to have been elected as a Fellow of the Royal Society of Edinburgh, one of the world’s oldest and most respected academic societies. It is inspiring to join this fellowship of luminaries from different walks of life who are striving for the economic and social well-being of the world. The Fellowship will provide me an opportunity to work collectively and collaboratively with some of the greatest minds to solve the pressing issues of our times through innovative solutions for the greater good of mankind.”

Ms Mazumdar-Shaw is among the 80 luminaries to be appointed to the RSE’s Fellowship this year. Fellows are elected to join the RSE from across the sciences, arts, education, business, and public life in recognition of their impact in improving the world around them.

The RSE Fellowship is split into four broad sectors, covering the full range of physical and life sciences, arts, humanities, social sciences, education, professions, industry, business and public life. This year’s cohort represents the diversity of expertise within Scotland and the UK with leaders from business, tech, legal & other sectors.

Ms Kiran Mazumdar-Shaw is a pioneering biotech entrepreneur, a healthcare visionary, a global influencer, and a passionate philanthropist. As Founder of Biocon, an innovation-led global biopharmaceuticals enterprise, her vision and work have drawn global recognition both for Indian industry and her company.

The impact she has made as a leading woman in science has made her a role model globally. She is committed to equitable access to healthcare through affordable innovation as she pursues a path of making a difference to billions of lives globally. During the Covid-19 crisis, she has been championing the cause of the healthcare industry in finding innovative solutions to combat the pandemic.

Her inspiring achievements have earned her several coveted titles and awards, both national and international. She has been recognized with two of India’s highest civilian honours, the Padma Shri (1989) and the Padma Bhushan (2005). She has been conferred with the Order of Australia, Australia’s highest civilian honour, in 2020 and appointed Knight of the National Order of the French Legion of Honour in 2016. She was named EY World Entrepreneur of the Year in 2020. In 2014, she was honoured with the Othmer Gold Medal by the U.S.-based Chemical Heritage Foundation. The same year, the Kiel Institute for the World Economy, Germany, awarded her the Global Economy Prize.

Ms Mazumdar-Shaw holds key positions in various industry, educational, government and professional bodies. She was elected full-term member of the Board of Trustees of the prestigious Massachusetts Institute of Technology (MIT), U.S., in 2018 and as a Member of the National Academy of Engineering, U.S., in 2019. She is also among the earliest Indian signatories to the Giving Pledge, a global commitment to dedicate majority of her wealth to philanthropy.   Follow her on twitter: @kiranshaw