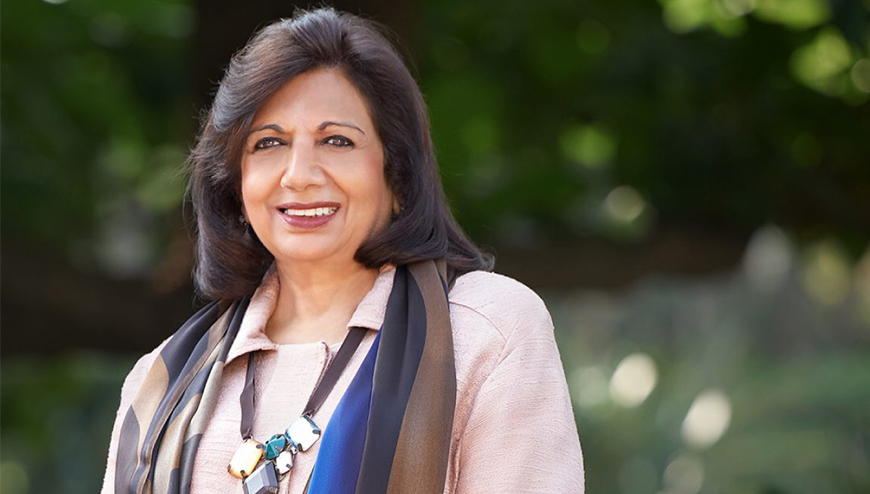 EY Entrepreneur of the Year (EOY) India Award recognizes entrepreneurs, who, with their disruptive ideas and passion to excel are creating successful enterprises and emerging as ‘Builders of a better India’. The award honours those who have contributed significantly towards nation building with their entrepreneurial ingenuity and visionary ideas.

In their felicitation, EY said Ms Kiran Mazumdar Shaw is “synonymous with the Indian biotech industry”, and has been at the “forefront of innovation” through her strong investments in research.

On receiving the Award, Ms Kiran Mazumdar-Shaw said: On receiving the Award, Kiran Mazumdar-Shaw said: “I am honoured to receive the EY Entrepreneur of the Year Award. Entrepreneurship is one of the most economically empowering pursuits, which allows you to follow your own path to solving some of society’s toughest challenges, driving sustainable inclusive growth and ultimately creating a better world. As an entrepreneur, I have been committed to building a differentiated humanitarian business that provides affordable access to life-saving medicines globally. I would like to appreciate the significant role played by EY in supporting entrepreneurship in both emerging and developed economies, aiding new business models to scale up overcoming their biggest barriers to growth.”

Ms Mazumdar-Shaw, who was among the 17 finalists for the EOY 2019 award, was felicitated at a grand awards gala, amidst a gathering of over 500 of India’s leading entrepreneurs, business icons, investors and government leaders, in New Delhi.

Adi Godrej, Chairman of the Godrej Group, was awarded the Lifetime Achievement Award, during the ceremony. Awards were also announced for nine other categories, including Start-up; Transformational Impact Person of the Year; Manufacturing; Services; Financial Services; Consumer Products & Retail; Life Sciences & Healthcare; Energy, Real Estate & Infrastructure; and Entrepreneurial CEO. Mr Piyush Goyal, Minister of Railways and Commerce & Industry, and Mr Anurag Thakur, Minister of State for Finance and Corporate Affairs, were the Chief Guest and Guest of Honour respectively at the Awards Banquet.

Every year, an independent jury comprising of some of India’s most eminent business leaders select the finalists and winners of the program. An eight-member jury panel, headed by Uday Kotak, Managing Director and CEO, Kotak Mahindra Bank, came together to select the best of finalists for the EOY India 2019 Awards program.

The India winner will join winners from different countries in June 2020 in Monte Carlo, where one entrepreneur will be announced as World Entrepreneur of The Year. As one of the world’s most prestigious business awards program for entrepreneurs, EOY Award recognizes business leaders who are excelling in areas such as innovation, financial performance and personal commitment to their businesses and communities. The program is conducted in 145 cities in 60 countries.

Ms Kiran Mazumdar-Shaw is a pioneering biotech entrepreneur, a healthcare visionary, a global influencer, and a passionate philanthropist. Founder of Biocon, an innovation-led global biopharmaceuticals enterprise, her vision and work have drawn global recognition both for Indian industry and her company.

Named among Time’s 100 most influential people in the world and Forbes’ 100 most powerful women, Ms. Mazumdar-Shaw has been pivotal in redefining the biotechnology landscape through Biocon’s initiatives and breaking new ground through her philosophy of ensuring affordable access to life-saving biopharmaceuticals globally.

Her inspiring achievements have earned her several coveted titles and awards, both national and international. She has been recognized with two of India’s highest civilian honours, the Padma Shri (1989) and the Padma Bhushan (2005). She has been conferred with the Order of Australia, Australia’s highest civilian honour, in 2020 and appointed Knight of the National Order of the French Legion of Honour in 2016.

In 2014, she was honoured with the Othmer Gold Medal by the U.S.-based Chemical Heritage Foundation. The same year, the Kiel Institute for the World Economy, Germany, awarded her the Global Economy Prize.

Ms Mazumdar-Shaw holds key positions in various industry, educational, government and professional bodies. She was elected full-term member of the Board of Trustees of the prestigious Massachusetts Institute of Technology (MIT), U.S., in 2018 and as a Member of the National Academy of Engineering, U.S., in 2019.

She is also among the earliest Indian signatories to the Giving Pledge, a global commitment to dedicate majority of her wealth to philanthropy.

Biocon Limited, publicly listed in 2004, (BSE code: 532523, NSE Id: BIOCON, ISIN Id: INE376G01013) is an innovation-led global biopharmaceuticals company committed to enhance affordable access to complex therapies for chronic conditions like diabetes, cancer and autoimmune. Biocon has developed and commercialized novel biologics, biosimilars, and complex small molecule APIs in India and several key global markets as well as generic formulations in the U.S. and Europe. It is a leading global player for APIs including statins, immunosuppressants and specialty molecules. It also has a pipeline of promising novel assets in immunotherapy under development. Biocon Biologics is a subsidiary of Biocon Ltd. It is uniquely positioned as a fully integrated ‘pure play’ biosimilars organization in the world and aspires to transform patient lives through innovative and inclusive healthcare solutions. The Company has a large portfolio of biosimilars under global clinical development with three of these commercialized in developed markets like EU, Australia, U.S. and Japan. Biocon is committed to pursue the path of innovation to develop products that have the potential to benefit a billion lives. For more information, visit www.biocon.com Follow-us on Twitter: @bioconlimited

Previous Next
Close
Test Caption
Test Description goes like this